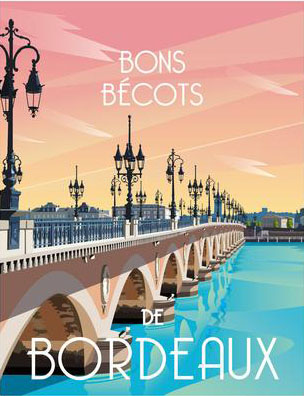 Ok, so here’s my second WSET region guide. I did Burgundy first because, let’s face it, Bordeaux is a pain in the arse to explain. You could do a degree on Bordeaux alone. Anyway, here goes the simple version… deep breath…

Here’s a map of Bordeaux. It’s in south-west France, sitting at the mouth of the Gironde estuary where the Garonne and Dordogne rivers meet.

Above: The simplified Bordeaux map from the WSET manual

Although Bordeaux produces some of the world’s most desirable wines, it’s a bit of a nightmare to study. This is partly due to its number of different appelations (place names), and partly due to its 1855 Classification System, dating back to, erm… 1855.

Drawn up at Napoleon’s request, this system divided the region’s “best” wineries into First, Second, Third, Fourth or Fifth Growths (Premier Cru, Deuxième Cru etc in French). These gradings were based on the respective chateaux’ reputation and trading price at the time, and the system is still in place today. Traditionalists down there, clearly. Just to make it more complicated, some appelations and most white wines aren’t included. Anyway, a lot of people think it’s a big marketing scam so enough about that.

One thing you really need to know about Bordeaux is that it’s primarily known for red wine (which makes up 90 per cent of production). You’ve probably heard the UK term Claret, which refers to any red wine made in Bordeaux, using one of the Bordeaux blends. The reds tend to be a mixture of Cabernet Sauvignon (or Cabernet Franc) and Merlot, with aromas of plums and blackcurrant. The whites are usually a blend of Sémillon and Sauvignon Blanc, and include some highly prized “noble rot” dessert wines from Sauternes.

Being blends doesn’t affect a wine’s quality, by the way, as it can with, say, whiskies. In fact, many of the world’s most prestigious wines are carefully balanced blends. The Bordeaux blends vary in grape dominance, depending on whether they’re from the Left or Right Bank. 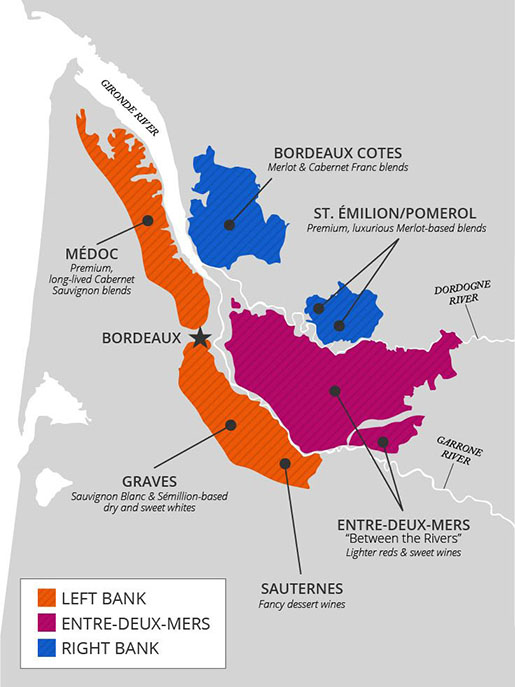 The Left Bank (Médoc and Graves)
The Left Bank blend is dominated by Cabernet Sauvignon, which thrives in its gravel soils. The most famous sub-regions in the Médoc include Pauillac, Saint-Julien, Saint–Estephe, Margaux and Pessac-Leognan (the areas first classified in 1855). Médoc wines can be bold and tannic, and sometimes contain a small proportion of Malbec and Petit Verdot, alongside the Cab Sav and Merlot.

The Right Bank (Libournais)
The red clay soils here produce plummy reds dominated by Merlot. The best-known sub-regions include Pomerol and Saint-Emilion. A typical Right Bank blend would be Merlot with Cabernet Franc or Cab Sauvignon.

So there you go. That wasn’t too hard, was it? Now you’ve got the basics you can go out and learn more. And remember, Bordeaux wines aren’t only for monocle-wearing aristocrats. Expensive vineyards in Bordeaux are often located right next door to cheaper areas because price variation can be affected by regional micro-climates or “terrior”. But this doesn’t mean the lesser areas are no good and, as with anything, you’ll get diminishing returns the more you pay. Santé!

Thinking of visiting Bordeaux? You’ll want to check out my guide to Cool Things To Do In Bordeaux

WSET Exam: How to Get a Distinction