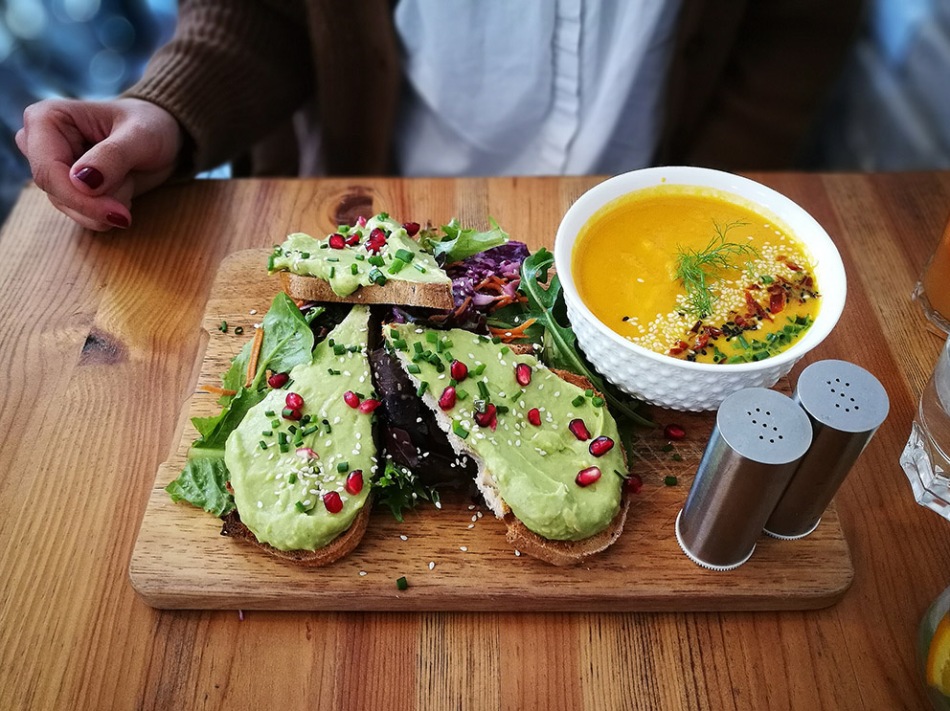 It’s not all about wine in Bordeaux, you know. Not quite, anyway. Nowadays, it’s one of Europe’s hippest towns. If you’re planning a trip (and you should be), here are some ideas for cool things do to in Bordeaux city centre.

Flâneur French (flanœʀ). Noun. One who saunters around observing society

According to my hefty, old-school, hardback dictionary, flâneur is a noun, meaning someone who loafs idly around town. This definition needs updating though, because these days flaneur has entered common parlance as a verb, meaning to mooch around with curiosity, uncovering interesting things as you go.

And while flaneuring (verb) is, of course, the best way to experience a city, you do need some structure to your flaneur (noun). Otherwise you just end up getting lost and hungry. Especially in a city like Bordeaux, which is probably the easiest city to get lost in that I’ve ever been to.

You see, Bordeaux city centre is bigger, flatter and more sprawling than you might expect. The lofty stone buildings that tower over its narrow medieval streets tend to obscure your view. And despite the Garonne river acting as an anchor point to the east (and even with the aid of Google Maps), it’s easy to swerve off piste and lose that little bar or coffee shop you’ve been searching for.

So here’s a little guide to the cool things to do I discovered during my many hours of flaneuring around Bordeaux city centre. Each recommendation has a number, which is is marked on the map at the bottom. Because I’m nice like that. 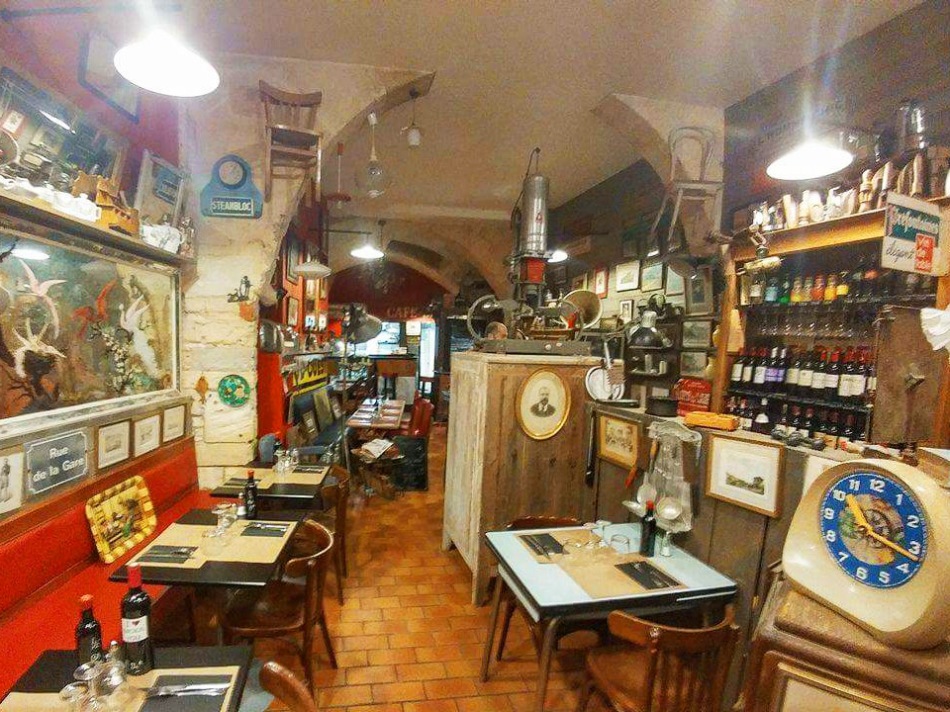 I was fortunate to find Toque & Broc. It was right around the corner from my Air BnB, and exactly the sort of restaurant I always look for when I’m away. Tucked down a narrow side street, it’s a total one-off: eccentric and weird, with random curiosities hanging off the walls. It feels like a crazy old hoarder’s antique/junk shop.

And the food is the best I had during my entire trip to Bordeaux. You must try the sharing starter platter, which features baked goat’s cheese, savoury crème brûlée, gazpacho soup, smoked salmon, and wonderful tomato passata on toast. The lamb was one of the tastiest mains I’ve had in years.

Cool cat that it is, it only opens when it feels like it, which is 7.30-10pm Tue-Sat. They are on Facebook (link below), but a website? Forget it. 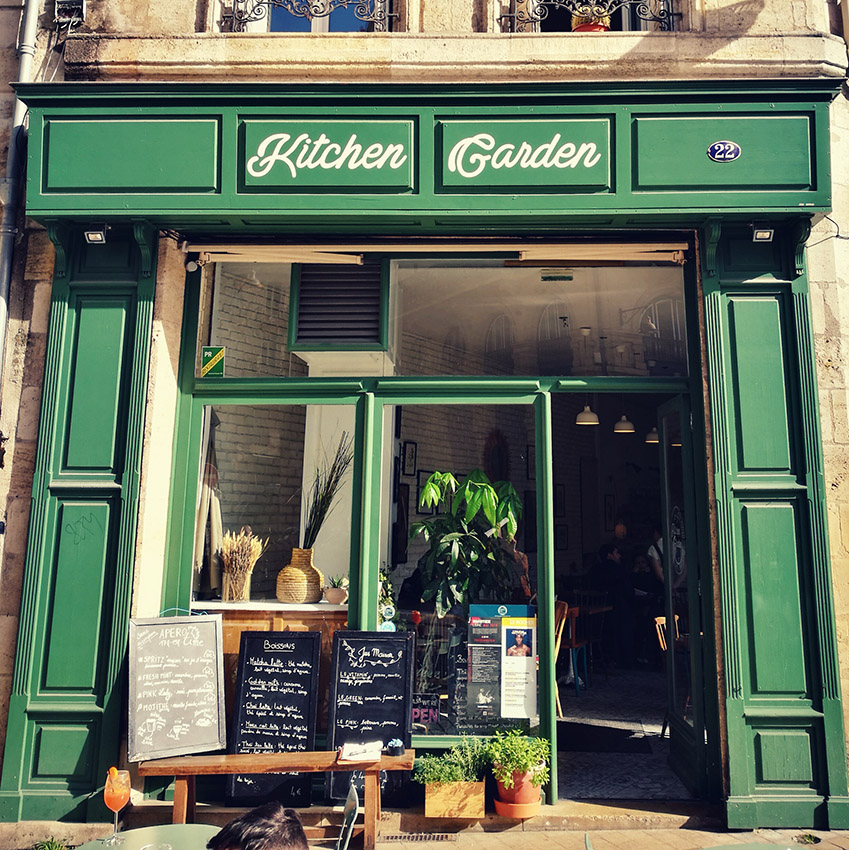 Lunch in veggie restaurant Kitchen Garden could be exactly what you need to clean yourself out if you’ve been overindulging on red wine and meat. It also offers a good opportunity to walk around nearby Place Fernand Lafargue, with its hip wine bars and Oriental restaurants.

If spiralised courgette-spaghetti bolognese or mashed avocado on toast with spicy soup (pictured, top), washed down with a cold Semillion and a slice of orange cake sounds like your kind of thing, you’re sorted. Friendly atmosphere too.

Pick Up A Posh Souvenir At Les Comptoirs De Magellan (3) 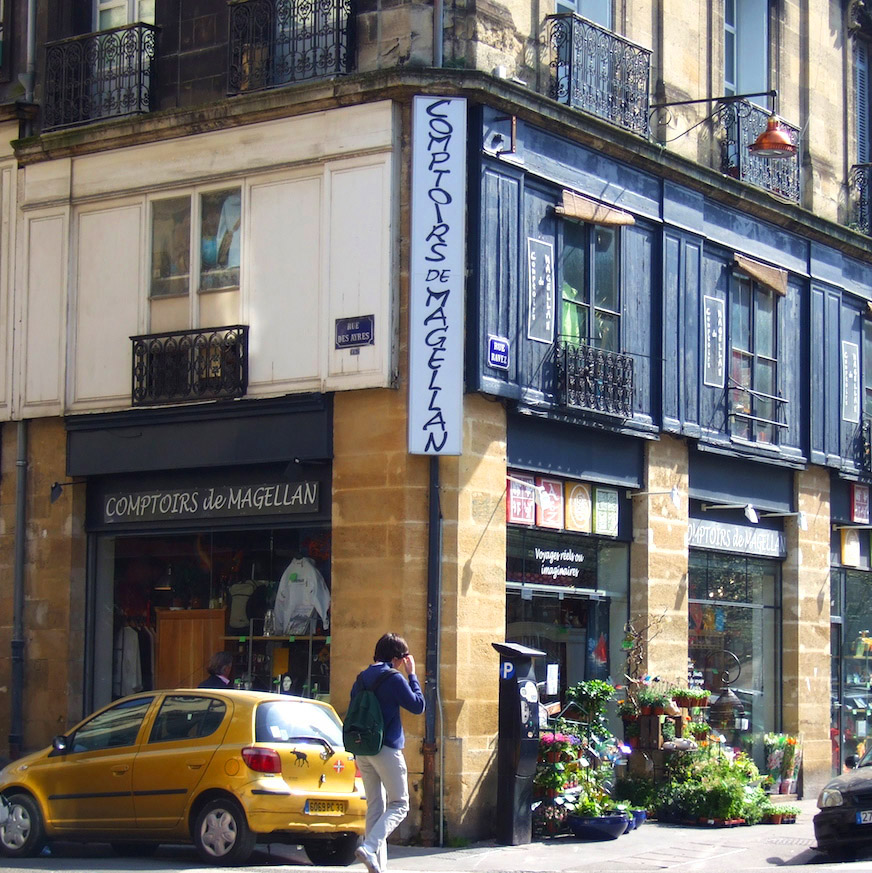 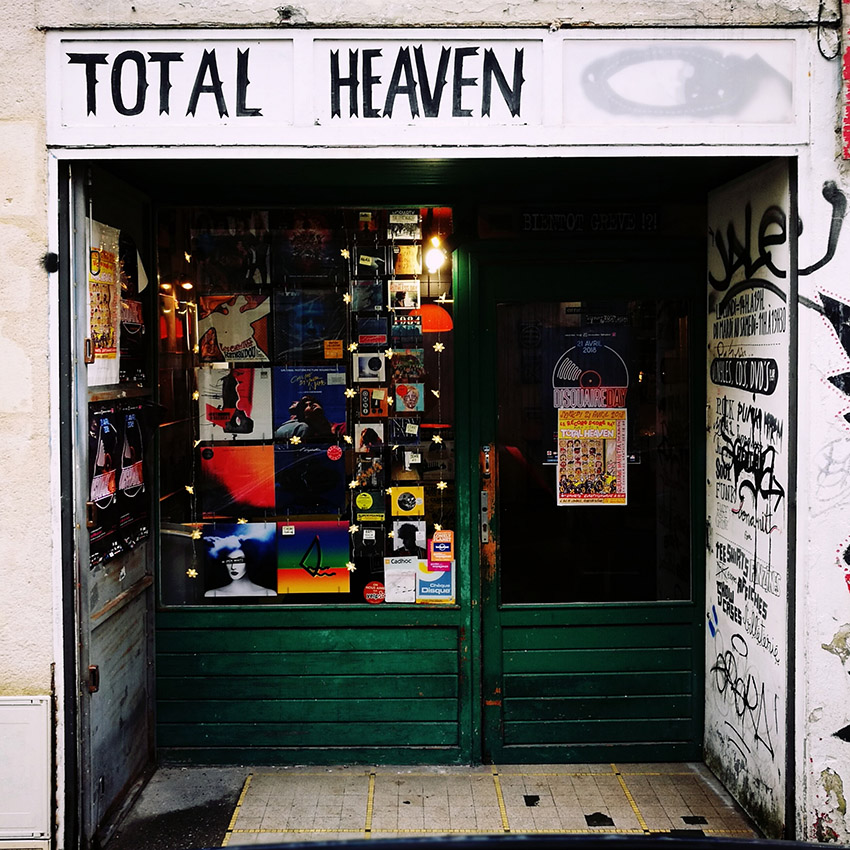 One of my citybreak maxims is “Find the path of the cool record shops.” And this seemed particularly apt in Bordeaux, which I recently read has the second highest number of record shops per capita of any major city (after my home town, Brighton, yay).

The snag is that not all of Bordeaux’s record shops are that cool. You’ll find a lot of them selling knackered old easy-listening discs. There are some good ones though. Two of my favourites were Total Heaven (6 Rue de Candale, near the university’s Victoire campus), and Diabolo Menthe (30 Rue de Cheverus), which has lots of  live bootlegs for those after something unusual. They can be pricey though. Expect to pay €25 for decent vinyl in the shops, BUT you can find some rare bargains at the markets (see number 6).

Experience A Gig On A Boat (5) 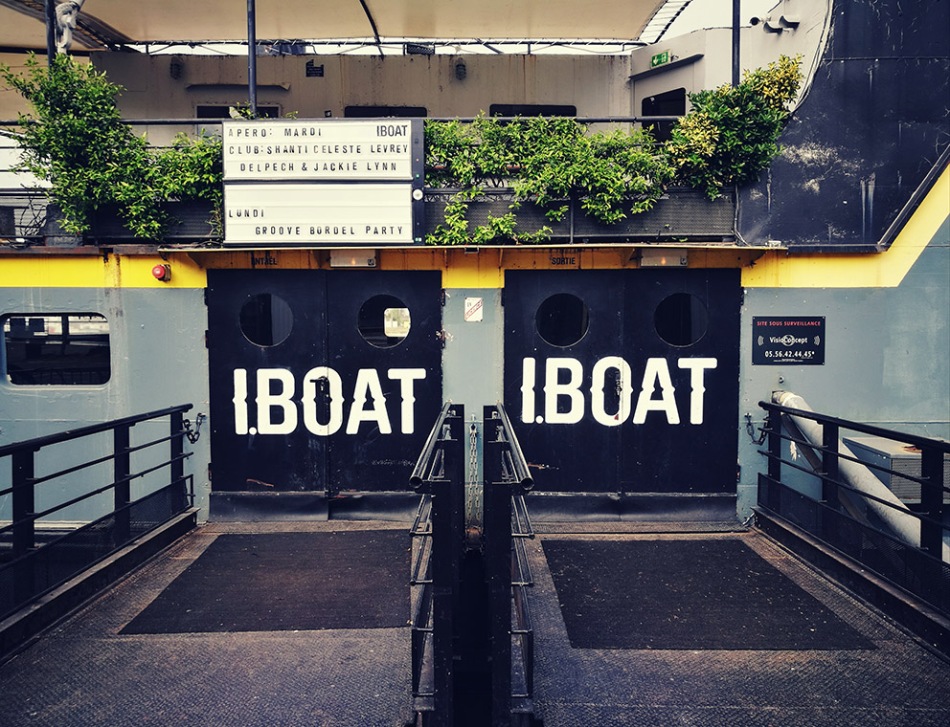 Up near the Cité du Vin (see number 8), in a dodgy, scruffy dockside that looks like something from a Grand Theft Auto game, lies this unusual 200-capacity gig/club venue. As the name suggests, it’s on a boat. If you’re into music, and you’ve never been to a gig on a boat before, then it’s got to be a no-brainer. You’ll want to hop on the tram if you’re coming from the town centre though — it’s a bit of a trek. There’s a restaurant on board too, featuring “a daily arrival of fish and seafood direct from the criee”.

Antiques and home décor shops are one of Bordeaux’s main strengths. For a start, it’s the best place I’ve ever been for lampshades. You’ll find a lot of interiors places the old part of town (to the east of Rue Sainte-Catherine, Europe’s longest pedestrianised shopping street). But if you’re lucky enough to be in town for the Brocante des Quinconces (a massive open-air market in the Place de Quinconces), you’re in for a treat.

The Brocante des Quinconces is a vintage paradise (see pic above). It’s not all furniture though. I marched off with a mint copy of the first Public Image Ltd LP, which I bagged for 10 Euro, so I was satisfied with that.

If the market’s not on, it’s still worth checking out the Place de Quinconces, it’s the largest square in Europe and there’s usually something going on. The word Quinconces, by the way, refers to the way the way the trees alongside it are planted, in staggered rows. They must be very cooling to walk through in the heat of summer.

Guzzle Bargain-Priced, High-Quality Wine. And Maybe Get A Free Poster (7) 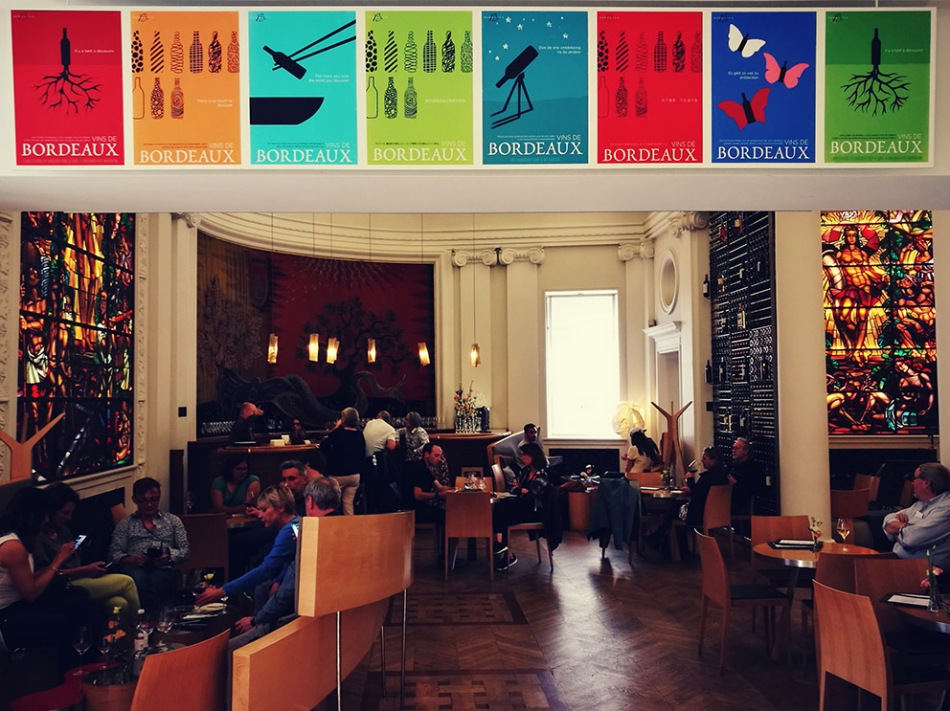 Bar à Vin was recommended by the owners of my accommodation as “the best and cheapest place to drink wine in town”. It’s certainly an excellent showcase for Bordeaux wines, with a big menu of high-quality offerings from around 3-8 Euro a glass, which is très reasonable considering the quality of what you get. You’ll need to like red though, as there’s only one white on the menu.

The main reason the prices are so reasonable and the quality so high is that Bar à Vin is run by the Bordeaux Wine Council, the HQ of which is upstairs, so they’re keen to promote Bordeaux to as many people as possible.

I loved the posters they had on show (see pic above), and when I asked if they were for sale, the waiter told me they were free! So I ended up going home with one in my suitcase. Say the Wine Ninja sent you, and you might get one too.

Like many places in Bordeaux, it’s not open on Sundays. Booo. 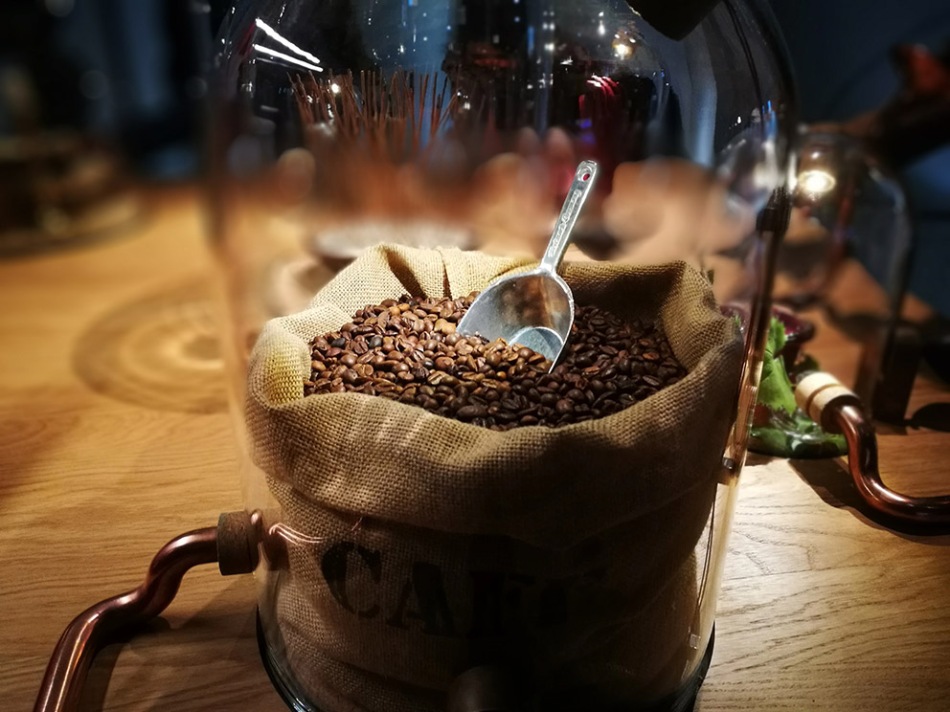 It’d be silly not to mention Le Cité du Vin, Bordeaux’s latest and biggest tourist attraction — and the most hi-tech museum I’ve ever visited.

It’s a bit of a walk north of the city centre along the river (past some generic restaurants and an interesting but expensive market), but if you can stomach the 20 Euro entry fee and the long queues, it’s worth a visit. It’s definitely more interesting than the Contemporary Art Museum, which was a bit of a letdown.

Everything’s interactive, with each exhibit linking via WiFi to the Star Trek headsets they provide you with on entry. As it’s all so new and technology-based, there’s the odd glitch here and there, but it’s generally really well put together.

My favourite was the sensual area, where you get to test your olfactory expertise by pumping smells into your nostrils from glass jars through Victorian-style funnels (see pic, above). Your entry fee also includes a free glass of wine on the panoramic eighth-floor bar. Although the portions are small, the selection of unusual varieties from around the world (from Mexico to Moldova) is interesting and of a high quality. 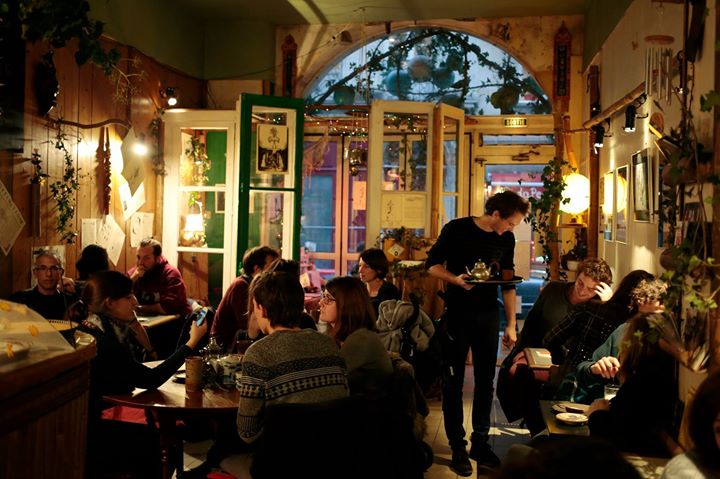 It isn’t exactly a go-out-of-your-way destination, but I had a most relaxing cup of chai at Le Tchaï tea house while sheltering from a torrential rain storm. One of those memorable but unplanned moments you cherish on a weekend away.

It’s a proper hippie place: yoga posters and Eastern/Hindu iconography on the walls, a chillout area, and a student with dreadlocks reading a book about the Iranian revolution in the corner. You get the vibe.

To drink, it’s speciality teas, lassis, milkshakes and juices. And a calming and friendly atmosphere.

Treat Someone To A Very Weird Present At Au Dénicheur (11) 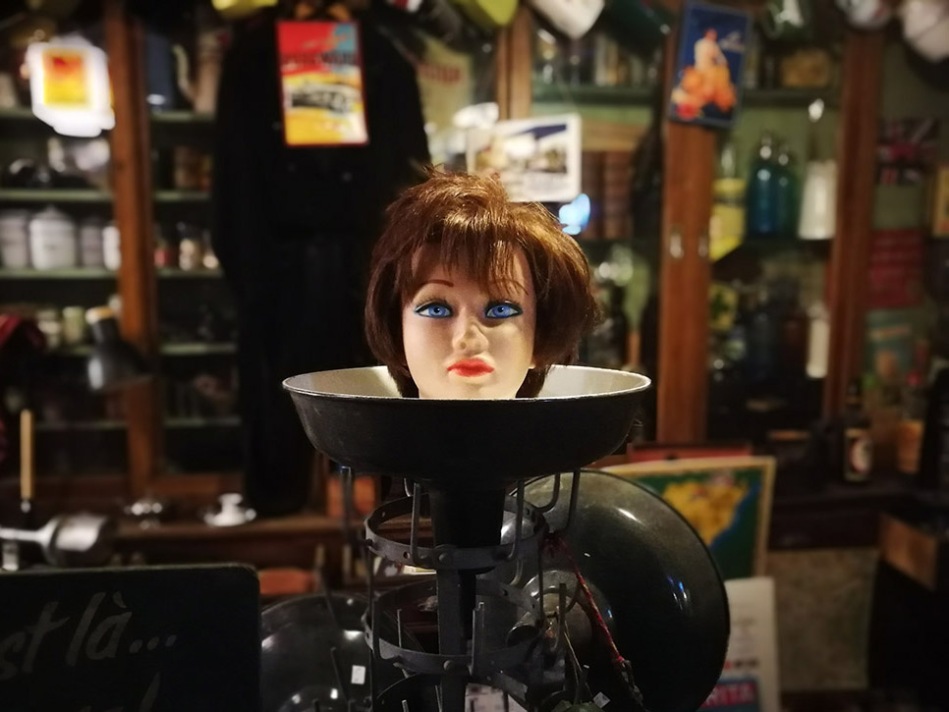 This crazy shop offers every kind of random nonsense you can imagine. And quite a few you can’t. From comics and action figures to military outfits and old signposts. Oh… and a disembodied mannequin’s head on what looks like some antique weighing scales (see above). You always need one of those.

Finally… Stay at the Quirkiest B&B in Town (*)

I stayed in this “Atypical Bedroom” in a 17th century building near the Pont de Pierre. It’s by far the quirkiest Air BnB I’ve ever had. The kitchen and bathroom/toilet is shared with the hosts, but you have your own private living room, with a large sofa and a TV the size of Luxembourg.

Best of all, to access your bedroom, you walk down a spiral staircase into a stone “cavern” with its own wine cellar behind one wall. The place feels like the basement of an ancient castle, and smells like a cave (in a good way). Very unusual, and difficult to describe to one who hasn’t experienced it. Cheap, too. Click below for full info…

EasyJet currently fly from London Gatwick to Bordeaux from £51 return, so Londoners… you have no excuses. 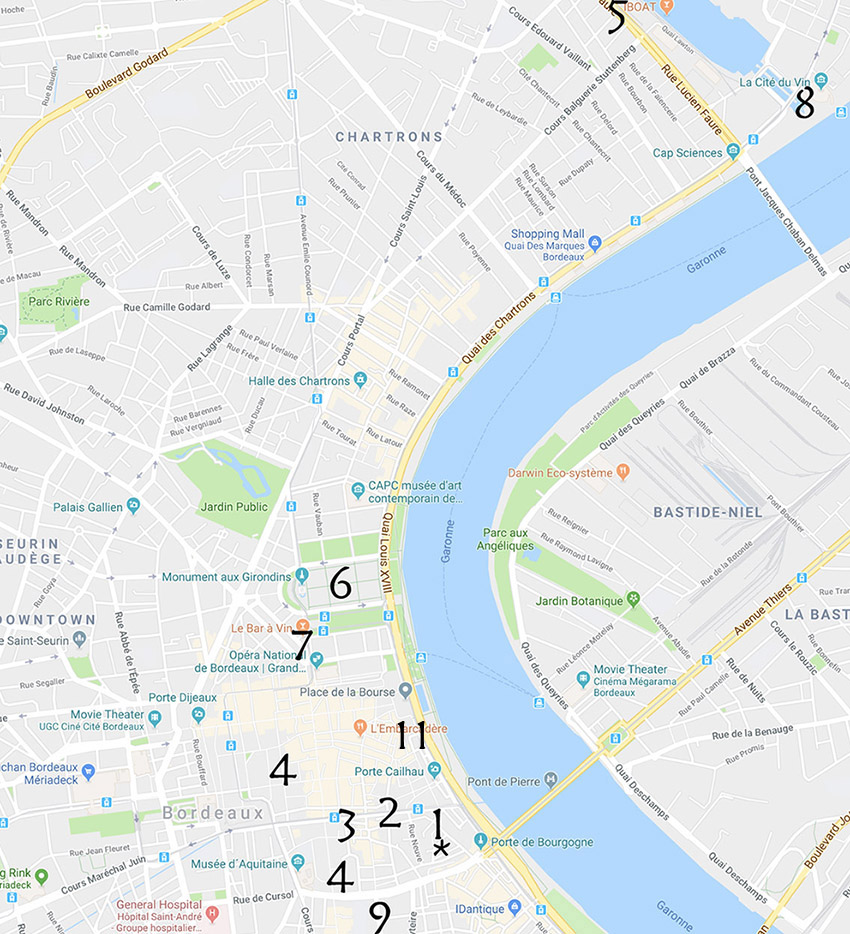 8 comments on “Cool Things To Do In Bordeaux City Centre”