If you want to get serious about wine, the internationally recognised WSET Level 2 (intermediate) diploma in wines and spirits is the perfect place to start. There’s a lot to absorb, but it’s likely you won’t realise quite how much until you start revising properly, towards the end of the course. That’s what happened to me and most of the students in my class, anyway. It’s not a difficult exam to pass, but if you want to get a distinction you’ll have to put in a bit of work. If I can do it, you can — you just need to revise tactically.

The WSET revision manual categorises its chapters by grape, but here I’m going to do it by region. I believe this chops the information up into more easily digestible chunks, and makes it more interesting too. Also, it’s usually beneficial to come at things from more than one angle. I won’t go into much detail… the aim is to give an overview. And then, if you want further info you can digest the WSET book. Don’t bother learning everything though: focus on the most salient info and ditch the waffle. So, Burgundy…

Or Bourgogne, as they say in French, is a long, thin region that sits like a bloody scar on the cheek of France, just east of the centre and south-east of Paris. Along with Bordeaux, it’s the most important wine region in the country, and thus arguably the world. C’est en rouge ici, regardez! 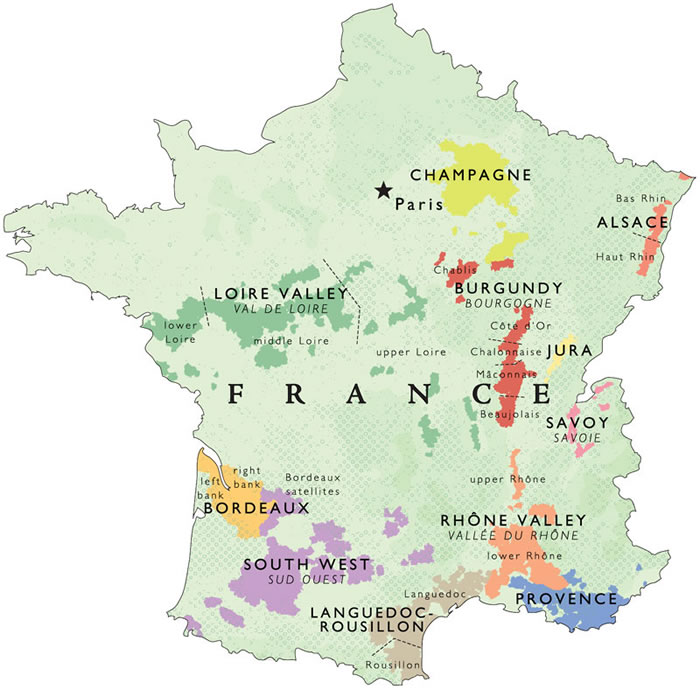 Burgundy is known for two grape varieties: Chardonnay (white) and Pinot Noir (red). Of course, Chardonnay is grown all over the world, but here it has a particularly clean, zesty minerality due to the soil’s limestone content. Pinot Noir is harder to cultivate but can become complex with age (exhibiting red fruits, spices and even earthy, forest floor flavours). Consequently, good Pinos are particularly well respected and highly prized.

Here’s a list of the region’s five major areas, from the north down…

Chablis: cut adrift from the rest of Burgundy, Chablis can be found to the north west, towards Paris and just south of Champagne. It’s known for its elegant, steely whites, always made from 100 per cent Chardonnay. Being a protected “AOC” area, Chablis must all conform to a minimum standard, but they’re ranked in order of quality (and price) like this: Petit Chablis (young, acidic); Chablis (most common. Greater minerality); Premier Cru Chablis (top 15%); Grand Cru Chablis (often oak aged with honey notes).

Côte de Nuits: this area produces some of the world’s most expensive wines, the vast majority being reds made from Pinot Noir, with the rest being Chardonnays. Key areas to remember here include Gevrey-Chambertin and Nuits-Saint-Georges.

Côte Chalonnaise: it might not have as much clout as the more northerly parts of Burgundy, but the Côte Chalonnaise produces some good value wines in places like Givry and Montagny. They also make Cremant here, a sparkling wine similar to Champagne (which, as we know, is made from Chardonnay and Pinot Noir).

Mâconnais: known mostly for its whites, Burgundy’s largest region also has the warmest climate, meaning its Chardonnays contain a more Mediterranean stone-fruit flavour. Its wines aren’t as renowned as those from the Côte de Beaune or Côte de Nuits, but its Pouilly-Fuissé (Chardonnay) is recognised throughout the world. The village of Chardonnay is in the Mâconnais, and if you’re after a inexpensive, refreshing supermarket white, a Mâcon-Villages is often a good bet.

And here’s the official WSET book’s Burgundy map. In the book there’s a map for Chardonnay and one for Pinot Noir. Through the magic of Photoshop, I have seamlessly combined the two, just for you, dear readers (yes, both of you)… 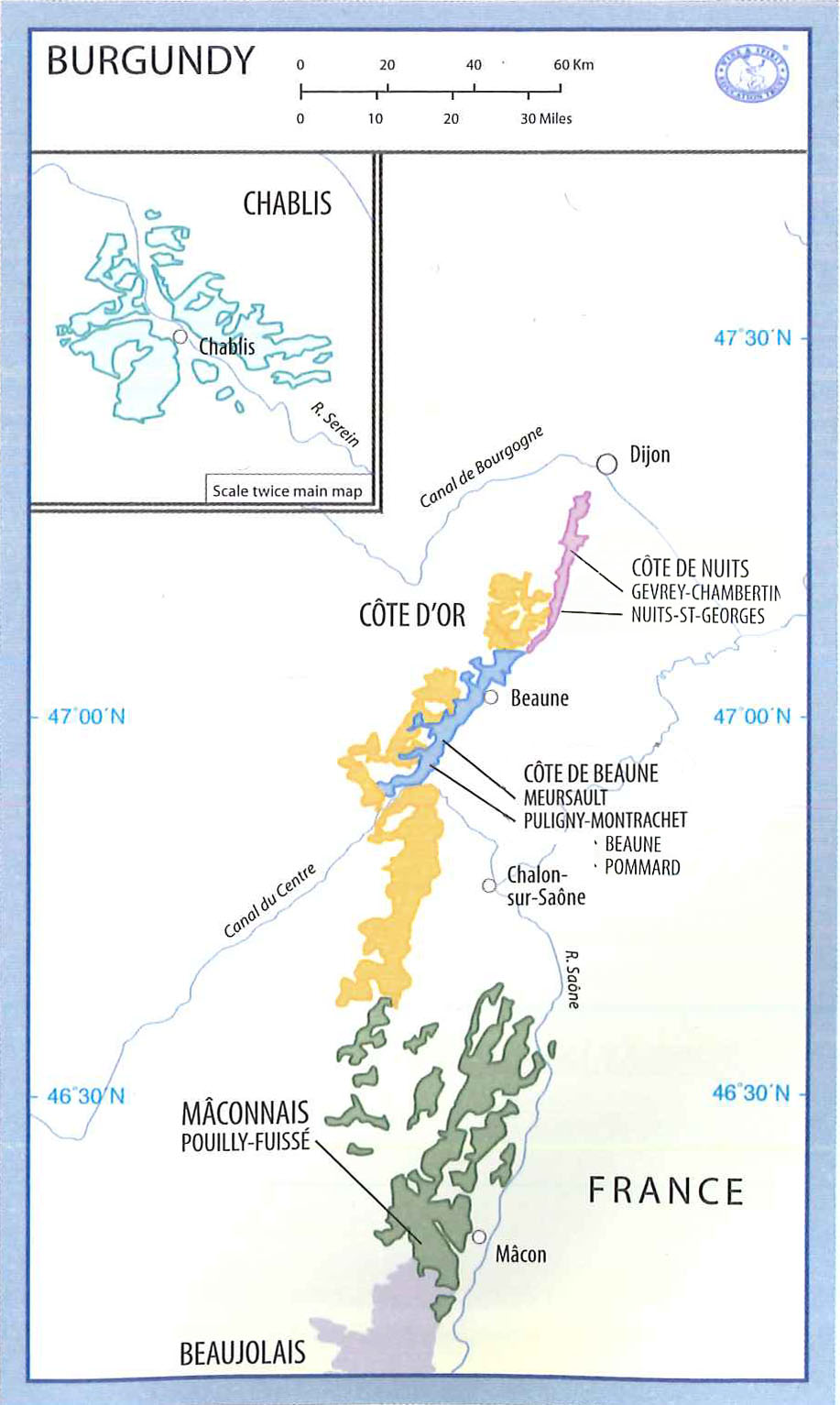 Because the French like to be awkward (only joking. Well, half joking), each region in France has its own classification system. Burgundy’s more than 100 appellations (wine-growing areas) are divided into four levels of quality. Generally, the smaller the area the wine comes from, the higher it’s ranked (of course, all Vins de Bourgogne come under the protected Burgundy AOP umbrella).

Village wines: named after the towns where the grapes are sourced. Examples include Pouilly-Fuissé and Givry.

Premier Cru: a bit more expensive, these come from specific vineyard areas within a village.

Grand Cru: from the top vineyards in Burgundy, these make up just over 1% of Burgundy production. Look out for big names like Romanée Conti and Montrachet.

That’s your lot for now. Let me know which wine region you’d like me to do next!

WSET Exam: How to Get a Distinction