The owner of Soul Tree Wines talks to me about the history of Indian wine, and where to buy it in the UK

During the monsoon season of 2016, I arrived in Mumbai en route to a safari-based press trip in central India (click here for some pics). Little did I know that I’d flown straight into the heart of India’s premier grape-growing region. In the airport and on the subway I was surprised by adverts for Indian producers Sula Wines. And in the bars and restaurants I came across locally produced Cabernet Sauvignon, Merlot, Shiraz, Sauvignon Blanc and Chenin Blanc.

I tried every one I could get my hands on, but I couldn’t find an expert to grill about the local vineyards. So when I got home I did some digging and discovered an English company was producing and importing Indian wine. They’re called Soul Tree and they’re based in the Midlands. I contacted the co-owner, Alok, who kindly gave me the lowdown…

He tells me his first experience of Indian wine was in 2008, just after he finished his MBA at Oxford. “I actually went looking for it,” he says. “I was intrigued as to why there was no Indian wine to speak of in this part of the world, when Indian culture is so popular and Indian cuisine so ubiquitous. It was actually this incident, and the fact that Indian wine proved hard to find, that sparked the idea that for Soul Tree.”

When I ask him how it differs from European wine, he reveals that India has a viticultural history dating back thousands of years. Of this, I was not aware. “Sadly the phylloxera epidemic in the mid-19th century wiped out the vineyards,” he tells me. “And the British had no economic or political will to re-establish them, with the growing popularity of whisky, beer, and rum as alternatives.”

He continues, “The modern Indian wine industry, re-established in the late 20th century, produces wine that is predominantly variety led, like wine from most of the New World. The terroir and conditions in India, however, are quite different from most other wine producing regions of the world.”

“The biggest wine producing region in India is in the western state of Maharashtra, at the northernmost end of an extinct volcanic mountain range called the Western Ghats. At around 20 degrees North the region is in the tropics, but most vineyards here are at altitudes of around 2,000ft above sea level. Summer in this part of the world is too hot for productive vines, so the region has a growing season through winter and sees harvest in early spring.” 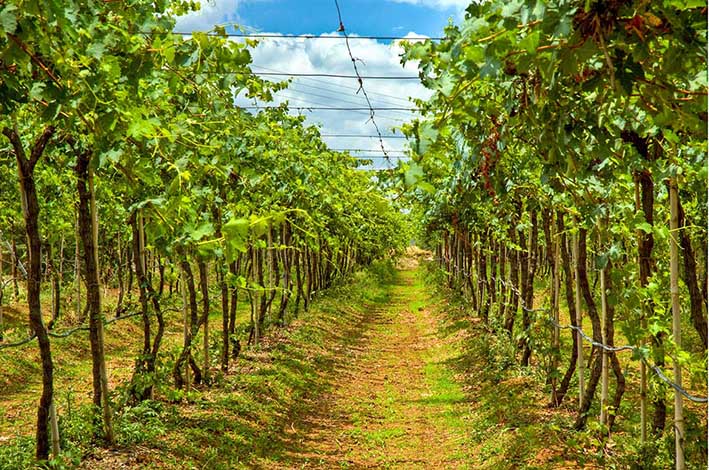 “What this means is warm tropical winter days with temperatures reaching as high as 28 degrees centigrade, and cool altitude-driven nights with temperatures dipping as low as 5-8 degrees. The combination of winter growth, a high diurnal temperature swing, mineral-rich volcanic soils, and a predictably dry winter results in fruit that is distinct from that grown in other regions in the world.”

“Winemaking styles in India are still evolving, but at Soul Tree we particularly look to produce wines that combine the unique terroir with a style we can call our own. Think single variety Sauvignon Blancs that sit somewhere between Sancerre and Marlborough, and Shiraz that is more Old World than New World. While sufficiently varietal in style, most of our range is different enough to be memorable and not replicas of the most popular styles from around the world.”

Alok thinks Indian wine is especially suited to partnering Indian food. It might be a dumb question, but why should this be the case?

“Since Indian wine is produced in India by Indian winemakers and predominantly for the Indian consumer,” he replies “it follows that there is an affinity for styles that would enable partnering with Indian food. Many Indian wines, for example, have very slightly higher residual sugar content to enable better pairing with spicy foods. On the other hand, a warm climate results in fruit with greater sugar content and therefore a higher resultant ABV in the wine – something that is not necessarily, on its own, great with spice.”

“With our UK base we have the ability to understand and keep pace with what the European consumer wants, and therefore strike a better balance between suitability for the local palate in this part of the world and being true to the region of origin.”

So which grape varieties are most commonly grown in India, and whereabouts is the best terroir?

“The most commonly grown grape varieties in India are Chenin Blanc, Sauvignon Blanc, Zinfandel, Shiraz, and Cabernet Sauvignon.” Hmm, just as I suspected from my limited time over there. “Other varieties seeing some success are Riesling, Merlot, and Viognier.” This surprises me more. “Winemakers are also working with a few indigenous grapes that we may see some commercial results out of in the years to come.”

Indian wine in the UK

Exciting times! So I guess the obvious question to end on is where can we buy Indian wine in the UK?

“Soul Tree is primarily available in the in-trade,” answers Alok “as is most Indian wine imported to the UK. With listings in over 1,000 outlets in the UK, Soul Tree is by far the biggest brand – most of these are Indian restaurants dotted across the country, but there is a rapidly increasing number of mainstream restaurants, pubs, bars, hotels, and independent retailers listing the wines too. Marks & Spencer have been selling an Indian wine – Jewel of Nashik – for the last couple of years or so.”

Alok Mathur is the co-founder and director of Soul Tree Wine and the chairman of the Midland Wine & Spirit Association.

0 comments on “Indian Wine In The UK: An Interview With Alok Mathur Of Soul Tree Wine”