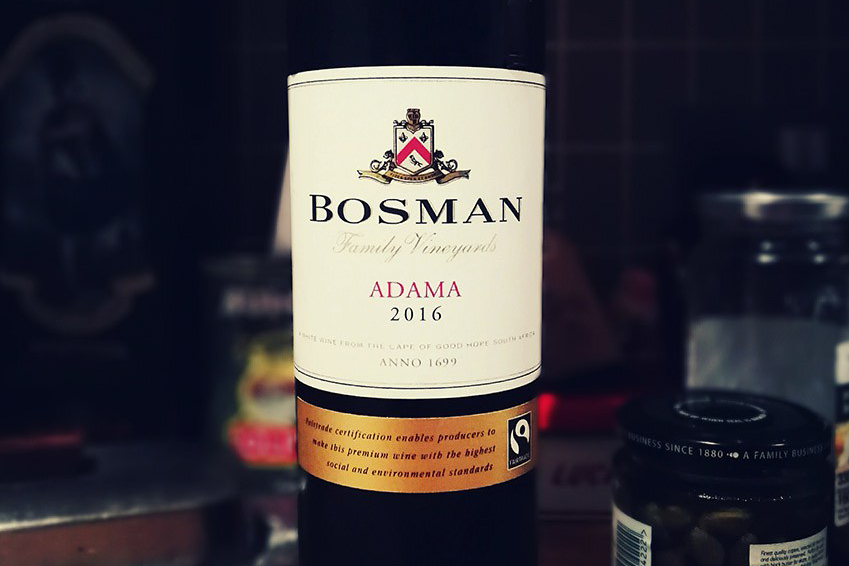 There are no obvious clues on the front of this Bosman Vineyards’ Adama, picked up at the Co-op, as to which grapes were used to make it. A glance at the Co-op’s website tells me it’s a Chenin Blanc. That makes sense, seeing as this is a South African wine.

But this, as I soon discover when I turn it around, is a bit of a porkie pie (that’s a “lie” to those unfamiliar with cockney rhyming slang”) because the rear label reveals it’s a blend of seven grapes. Seven! That’s verging on Châteauneuf-du-Pape territory.

As well as the Chenin Blanc (which predominates at 58%) we have: Chardonnay (16%), Grenache Blanc (10%), Pinot Gris (8%), Rousanne (4%), Semillon (2%) and Viognier (2%). Perhaps this is where the problem lies: most of those last six are among my favourite white grapes, whereas I’ve never been a huge fan of Chenin Blanc.

Indifference to Chenin Blanc aside, surely such a carefully crafted blend must be packing some unusual, feisty flavours? Apparently not. Quite the opposite, in fact. Despite the inclusion of some ample-bodied varietals, this is light in colour, light on the nose, and light in body too.

Don’t get me wrong, it’s not at all bad. It has delicate white fruits on the nose, reminiscent in some respects of a Burgundy, alongside a pleasant, subtle citrus flavour. It’s Fairtrade too, which is always a bonus. Just don’t expect it to jump out the bottle and surprise you like a fruity jack-in-the-box.

It’ll no doubt be a crowd-pleaser at parties (and it certainly won’t outshine your food), but if you prefer bolder whites there are better available in Co-op at this price point (£10). If there’s a couple of extra quid weighing down your pocket, I’d upgrade to their Saint Veran Burgundy (£11.99). It’s only made with one type of grape (Chardonnay), but it’s got more character than the Bosman’s seven combined.