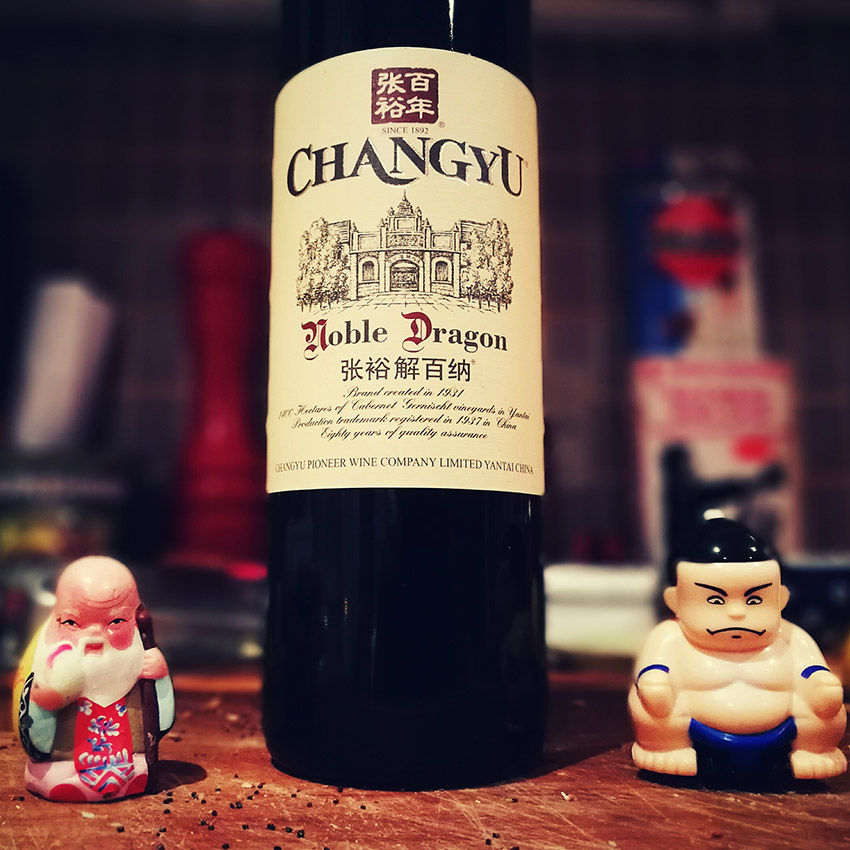 Ok, I know ninjas are Japanese. And we’re always the bad guys in Chinese kung fu movies. But still… this Wine Ninja was excited to spy this Changyu Noble Dragon Chinese wine on a covert reconnoissance mission of the Sainsbury’s wine isle.

Martial arts stereotypes aside — did this Noble Dragon have me breathing fire?

Up to this point, I’d never tasted Chinese wine (the last Chinese alcohol I’d had was a liqueur a friend brought back from Shanghai, which tasted of cow manure). And I deliberately didn’t read the label so that, like walking into a cinema knowing nothing about the film, I’d have no preconceptions.

First impression: it smelled like a hell’s angel’s jacket: black leather, tobacco smoke, an oily motorbike chain. In more wine-related parlance: it reminded me of cabernet sauvignon. I liked it!

And on finally reading the label, I realised my estimation was (at least partially) correct. It’s made with Cabernet Gernischt (a relative of Carménère), and also contains Cab Sauv and Cab Franc.

I’ve been getting fed up with generically oaky reds lately; too much boring Rioja and Malbec that all tastes the same. This one’s been in oak for six months and oak integration is about right.

And on the palate, as well as the usual dark fruit, a more unusual, woody flavour of… furniture polish.

Yep, I realise these aren’t the most appetising descriptions, but don’t take them the wrong way. In the wine world, furnitrue polish and bikers’ jackets aren’t necessarily a bad thing.

Although it’s only 12% volume, the Changyu Noble Dragon tastes full bodied and a whole bottle to yourself might be a bit much unless paired with the right food. The tannins are solid but not overpowering, and I’d advise fans of Bordeaux’s Cab Sauvignon blends (with whom this wine shares a heritage) to give it a try.

Apparently, Changyu is the oldest and the most famous winery in China, operating since 1892. I can’t believe it’s taken me this long to try it.

Also in Sainsbury’s, the Lussac St-Emilion Bordeaux is around the same price and has a similar, Cabernet-based flavour profile.

If you enjoyed this review, why not follow us on email for a weekly update.