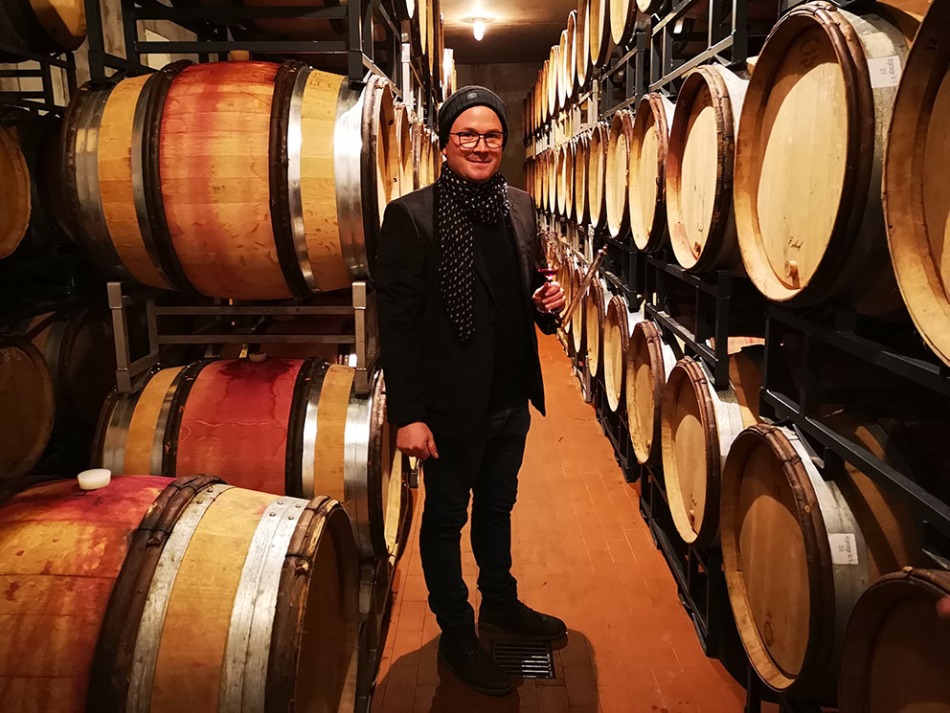 Hands up who’s tried Silvaner wine. If you’re reading this in the UK, there’s a good chance you haven’t. Because the Silvaner grape variety isn’t one you’ll find in your local Waitrose. You’ll even be lucky to track it down in the most adventurous independent wine shops.

So what is Silvaner (also spelled Sylvaner) wine? What does it taste like and where’s it from? VDP Franken (the association in charge of promoting and upholding the quality of Franconian wines) invited me to Germany to explore Silvaner in the best way possible — in its native habitat, alongside local food and in the company of the people who make it.

Where Is The Franken Wine Region?

Franconia *(it’s known as Franken in Germany, but I’m mostly using the Anglicised version here, because it sounds like a romantic fairytale kingdom) is a large region in central/southern Germany, to the east of Frankfurt and stretching south east into northern Bavaria. The verdant landscape is a little like Normandy in France or Emilia-Romagna in Italy, although the occasional quaintly Teutonic village acts as a clue to the real location.

And although it’s mainly flat, the landscape is punctuated by sharp inclines — perfect for grape cultivation.

Yes, they love their wine here. Towards the end of my trip, in a town called Mainz, I’m told (weirdly, by an American lady in a tiara called the Wine Queen) that they now export 25% of their production, including to far-flung locations like China and Japan.

But my Franconian adventure begins on a crisp, bright April morning, with a 75-minute flight from London Stansted airport to Frankfurt, where I’m met by local winemaker Sebastian Fürst — a likeable, kind-eyed man, whose winery Rudolph Fürst, I’m reliably told, produces some of the best Pinot Noir in Germany.

Sebastian is too modest to say that himself, of course. And he’s very fair about other winemakers’ produce, even if he doesn’t agree with their production techniques. “If there is passion, usually there is a good product,” he says.

He drives me and several other journos to his Weingut (winery), where we get exclusive samples straight from the barrel, followed by a memorable tasting in the dégustation room. It’s mostly Pinot Noir, but there’s also some Riesling and even a Chardonnay.

The wines are incredible, and I’m left wondering how any of the other producers will be able to follow this. Perhaps putting Fürst first on the schedule was a bad idea.

Sebastian doesn’t do buttery, oaky wines. “We go for freshness,” he says. And that means fiercely fruity red berry flavours but also a surprising level of contrast along the different varieties.

My favourite was the Pinot from Centgrafenberg (55 Euro on the Fürst website), with its strongly distinctive grassy menthol and liquorice flavours. The Centgraftenberg Riesling was stunning too. It sent tingles across my scalp and down my spine, like beautiful music.

A classy start to the trip, then. But I haven’t had any Silvaner yet. All this is about to change as we head to the Silvaner stronghold of Würzburg…

Sloping vineyards imperiously overlook the city of Würzburg, where the architecture is a strange mélange of medieval picturesqueness and austere modernism. Culturally, it’s known for its university, its historical bridge (the Alte Mainbrücke) and its wines. And you can combine all three of these by boozing on the bridge with some students (yes, there’s a pub on the bridge, which used to be a water mill).

After dropping our bags at the hotel, we head straight for the Bürgerspital winery, set within a 14th century courtyard in the heart of town. Here, we’re shown into the cellar by two Roberts (one German and one English with a Scottish surname), where the ornate wooden barrels give the place a rather topical Game of Thrones feel.

And it’s here that I finally get to try what I’ve been searching for.

Silvaner is fifth most widely grown white grape in Germany, and the majority of the wine made with it these days is dry. The ones produced at Bürgerspital come in the traditional “Bocksbeutel” (pictured below), which one of my fellow writers unkindly compares to “a certain Portuguese wine” (he means Mateus Rosé, if you don’t get the reference). There are also concerns about cellar storage, but these minor drawbacks don’t phase Robert and Robert (they should set up a wine spa called R&R). They love the bottles’ idiosyncratic brand identity. 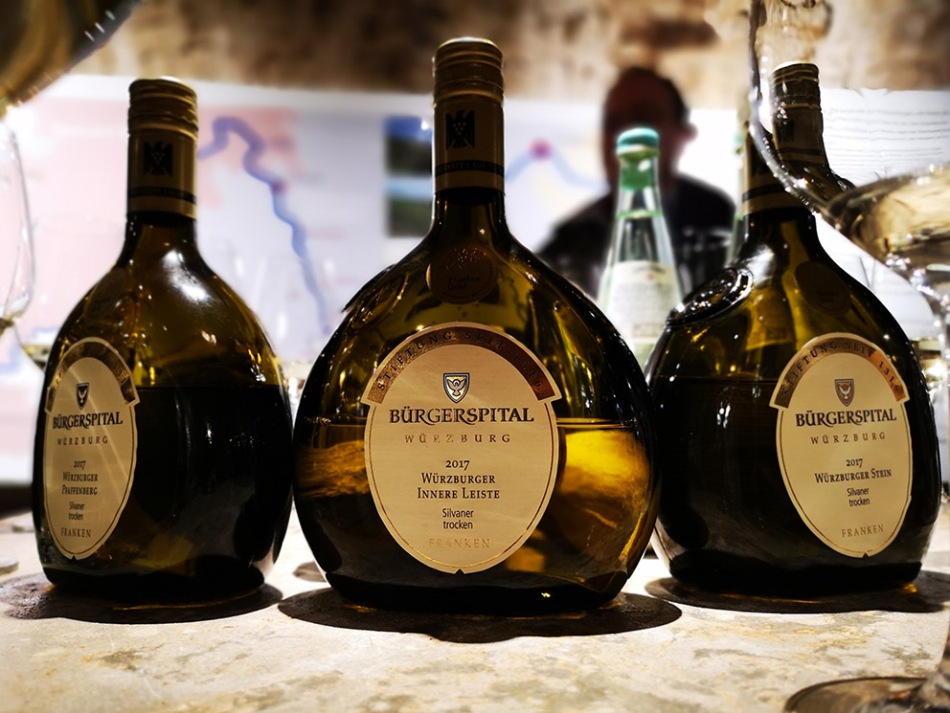 So what does Silvaner taste like? Not like Mateus Rosé, that’s for sure. Relatively light in body and alcohol and with the high acidity you expect from cool climates, Silvaner offers intense pear and apple aromas, occasionally against a backdrop of marzipan and white pepper. Some of the grapes are also grown in gypsum soil, which gives them a unique mineral character.

I’m not sure whether this is propaganda, but I’m also told that Silvaner ages better than Riesling. I like it. And I can’t understand why it isn’t more widely available in the UK.

Of course, export manager Robert Macgregor would like to see this situation change. He tells me that one of the UK’s main Silvaner importers is, oddly, Cambridge University Wine Society, because of its links with Würzburg University.

And although it’s yet to break the UK market, it’s enjoying a renaissance in its native land. “Twenty years ago when I came here, people thought I was mad. Who wants Silvaner? They said. But now people are coming up to me and saying, Silvaner… thats amazing,” beams Robert Mac.

Bürgerspital wines (and all the wines I taste on my Franconia Trip) proudly carry the VDP eagle logo on their labels. The symbol guarantees wines of the highest quality from some of the finest wine estates in Germany.

Similar to Bordeaux or Burgundy, the VDP has its own classification system, where the quality of a wine is defined according to “terroir”, or environmental factors. 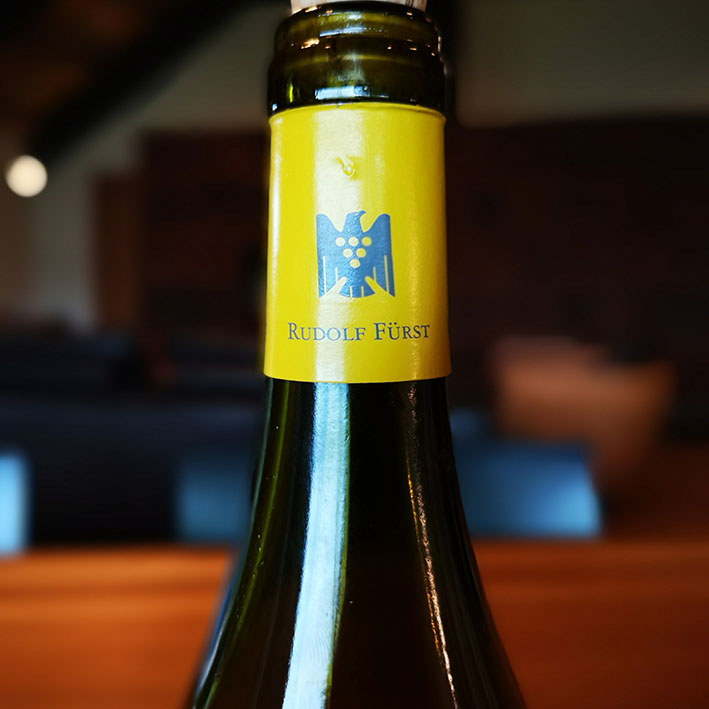 Starting at the base, they have Gutswein: good-value, entry-level wines that conform to the VDP’s prescribed standards.

One notch up is Ortswein: wines from a village’s best vineyards that are planted with grape varieties typical of their region.

And at the top is Grosse Lage, which is comparable to Grand Cru in France, where the wines are named after the vineyard, rather than the village where they’re made. Exceptional dry Grosse Lage wines are labelled Grosse Gewächse, or GG. GG wines are from the best vineyards of Germany, with very individual site-specific characteristics and great ageing potential.

Franconia’s winemakers love talking about their GG wines (initially, I think they’re saying chi-chi, which I find very confusing). A little smile appears on their faces whenever they mention it, presumably because they know they’re part of an exclusive, invitation-only club. Also, GG isn’t officially recognised in German wine law, having been set up by a group of producers in the early 2000s, which I reckon appeals to the winemakers’ rebellious nature.

So Where Can I Buy Silvaner In The UK?

Alas, like so many things these days, the answer is predominantly online.

The Wine Barn have a good selection of Iphöfer Silvaner made by Hans Wirsching, whose manager Uwe Matheus I met on my trip. There’s also some on the Wine Society website, although they don’t give much detail.

I’m also told you can get it at Berry Brothers in London, although they don’t seem to have any online at the time of writing.

In short… the UK needs more Silvaner wine. Hopefully I can help to make that happen. Maybe I’ll start importing it myself. Anyone want some?