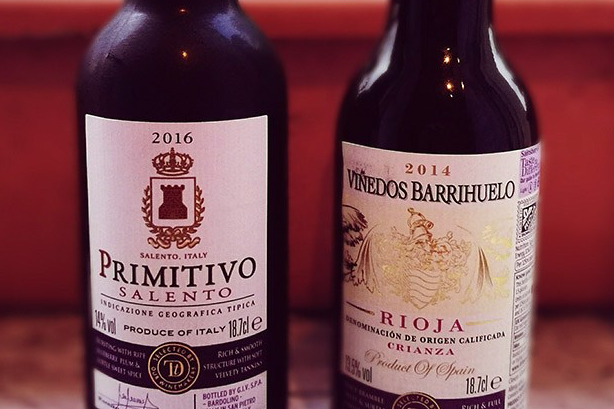 Forget Mayweather v McGregor. The question on most people’s lips this weekend will (probably) be… which is the best Sainsbury’s miniature red wine? Welcome to the battle of the bantamweight bottles.

Sainsbury’s do a pretty wide range of miniature wines, although (as is usually the case with the wee ones) they mostly fall into the “cooking wine” category. I chose the two most expensive reds (both still cheap at £2.30 a pop, equivalent to about nine quid a normal-sized bottle) to duke it out in this title decider. Let’s spill some claret! (yeah I know, claret is Bordeaux, but humour me)

In the red corner…

This is currently on offer at £6 for a full bottle (reduced from £7). I don’t normally expect much at that price, but this is decent value. Liquorice, tobacco, cherry and menthol jabs are followed up by a left-hook of leather from the oak, making for a surprisingly complex combo. This easy-drinking red also comes with a surprising but not entirely unpleasant (you may disagree) aroma of… shoe polish. Not bothered with fancy stuff like long finishes, it’s more Frank Bruno than Sugar Ray Leonard, but at least that makes it likeable.

And in the other red corner…

The miniature of this Primitivo is on at the same price as the Rioja, but it’s 50p more expensive at full size (£7.50, currently £6 on offer), making this a narrow bookies’ favourite. Its darker colour and fuller body give it an advantage in the weight department. It’s also taller (see above pic, taken at the weigh-in), younger (born in 2016 to the Rioja’s 2014) and slightly slightly stronger at 14%.

But… it’s not as punchy on the nose. I had to stick mine right into the glass to reach its notes of dark fruit and tobacco. Or should I say… ash tray. In fact, it smells like my dad used to after coming home from a night in the pub. Booze, fags, aftershave. I’m being a touch harsh here. When it opens up, there are some pleasant aromas of violet and oak. Not bad for the price.

They thought it was over the hill. But, just like Rocky, Rioja Balboa beat the odds to take it on a points decision. The bookies will be pleased.