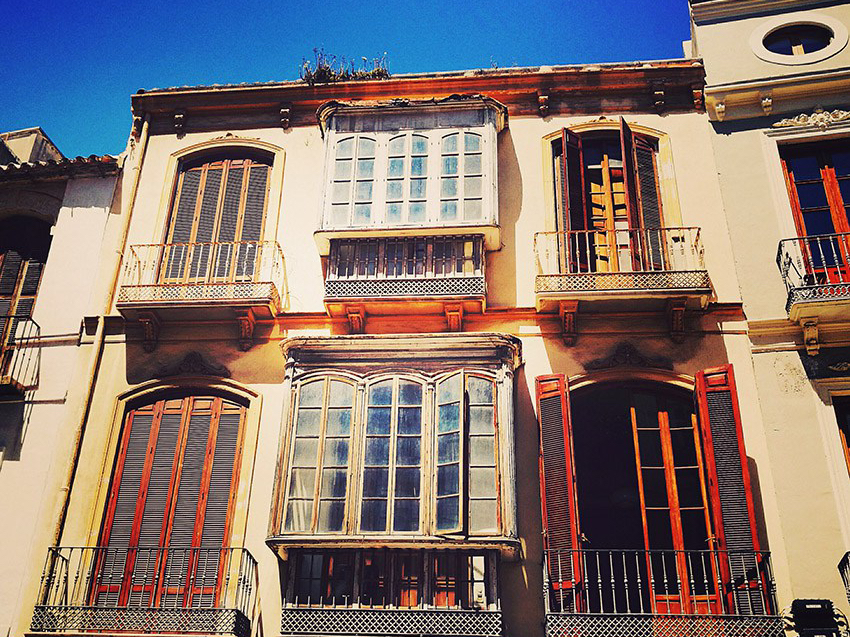 “Malaga: it’s the new Barcelona,” they say. Sound unlikely? Maybe. But, like any cliché, there’s some truth in it. There’s certainly much more to the city than “the airport en route to Torremolinos”. Pick up a tourist map and you’ll find exactly 50 churches, museums and galleries pinpointed on the reverse. Yes, 50! Not bad for a city of just over half a million people.

Before I did my research, I assumed Malaga was an industrial town. In reality, the baroque skyline in the city’s centre isn’t too dissimilar to Florence’s — and that’s obviously quite the compliment.

I spent five nights in Malaga in May 2017. Here’s a handful of personal recommendations.

6. FIND THE CASA INVISIBLE… IF YOU CAN 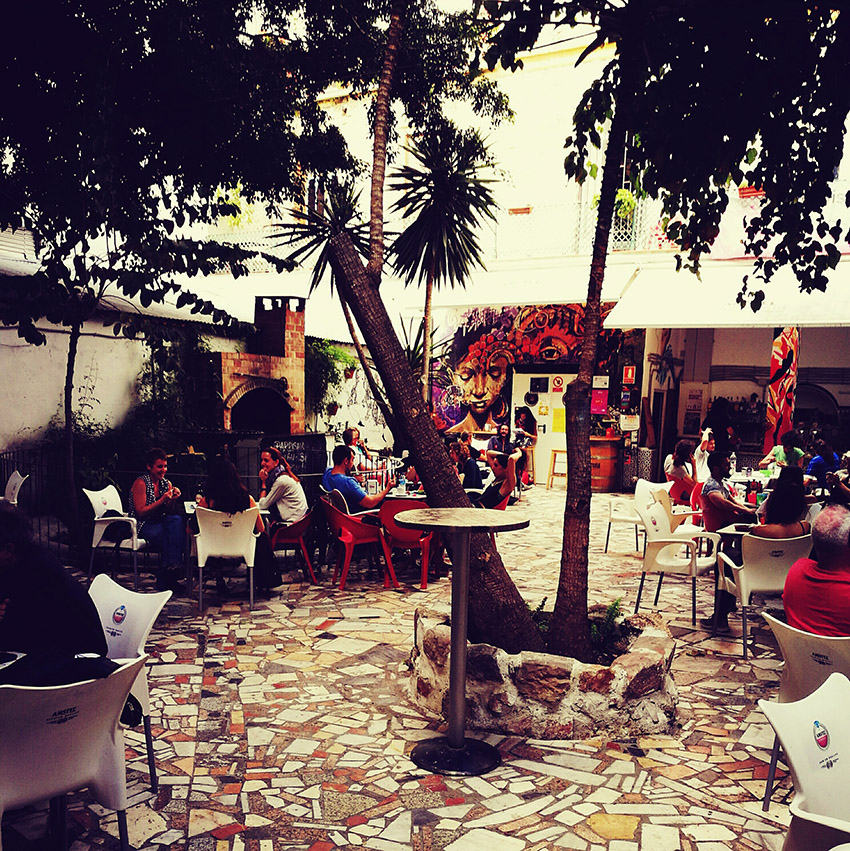 Wandering the streets alone on my first night, I implemented my city-break tactic of “if in doubt, always go down the narrowest street”. Fortunately, Malaga has lots of narrow streets to disappear down. And I got lucky when I came across an obscure little hippie hangout called Casa Invisible.

It’s an open-air bar in a courtyard with a fountain, selling cheap beer and tapas. It’s used as some kind of community centre and feels rather right-on. I didn’t hear a single English-speaking voice in there, so if you like hanging with the locals, this is the place for you.

There’s also an indoor space where they have live bands. There was one on the night I visited, playing what I can only describe as modern Spanish gypsy folk rock (much better than it sounds). It was free entry, too.

5. TAKE IN A FOOTBALL MATCH 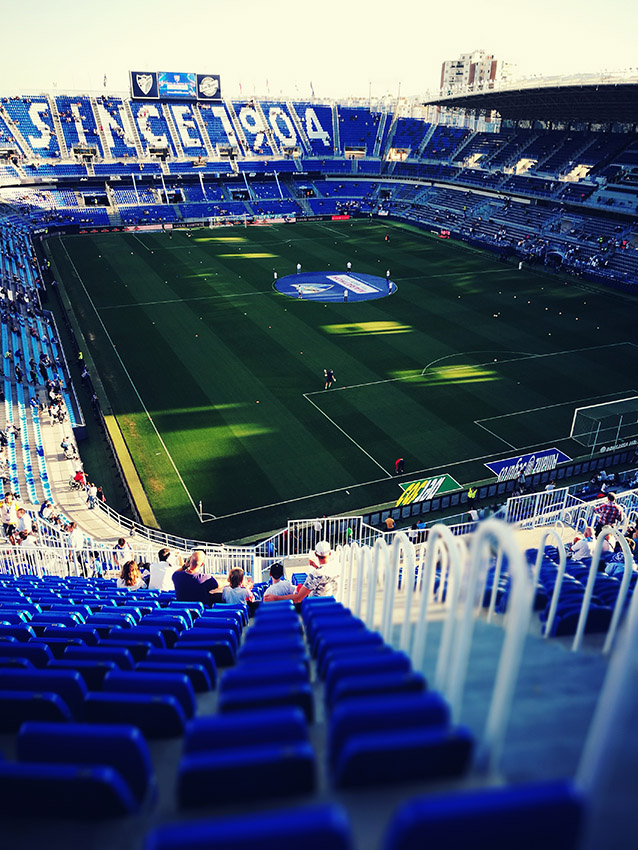 I’m not a big sports fan, so I was reluctant when my friends suggested a football match. I was glad I went though. We had a superb view from high up behind the goal, and the atmosphere was electric — even though it was an end-of-season clash, with nothing to play for.

It was only 15 Euro a ticket — cheap for a match in La Liga (Spain’s Premier League) and worth the price alone to see my friends’ faces when they discovered it was a “dry stadium”. Yeah… no beer. And we’d turned up an hour early due to a mix-up with the time difference. But “we” won 2-0, so a good night all round. 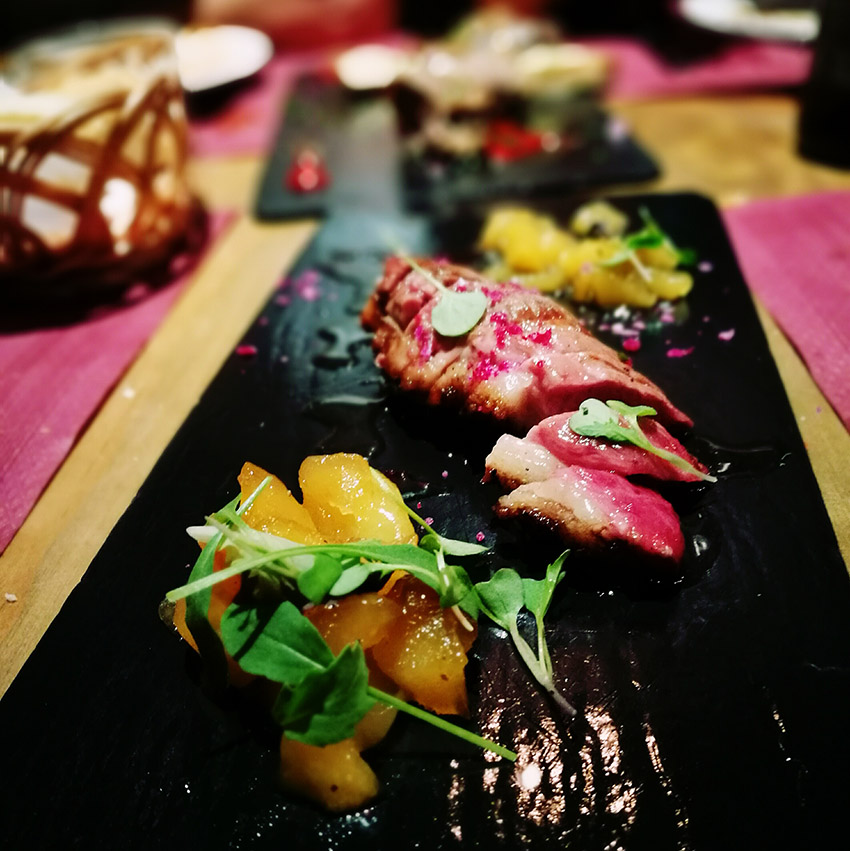 A friend of a friend, who lives in Malaga, recommended El Meson de Cervantes. It’s always useful to get local tips, and this place didn’t let us down. I was in a group of ten guys and we all agreed it was the best tapas we’d ever had.

Nearby Calle Carreteria, just north of the centre, is one of the top streets for restaurants and bars anyway, so make sure you head up there at some point. Take note: there’s at least one other tapas place called Cervantes. And, while I’m the others are very good, I haven’t eaten in them, so I can only speak for the one on the link above.

By the way, I also enjoyed lunching at Restaurante Noviembere (bright and modern; superb salads) and Recyclo Cafe (trendy bike-themed hangout, recommended to me by a young local guy I chatted to). El Pimpi — Malaga’s most famous restaurant, the front of which overlooks the Roman amphitheatre — is also a solid bet for dinner. It’s a bit expensive, but it’s worth it for the unique decor and lively vibe. 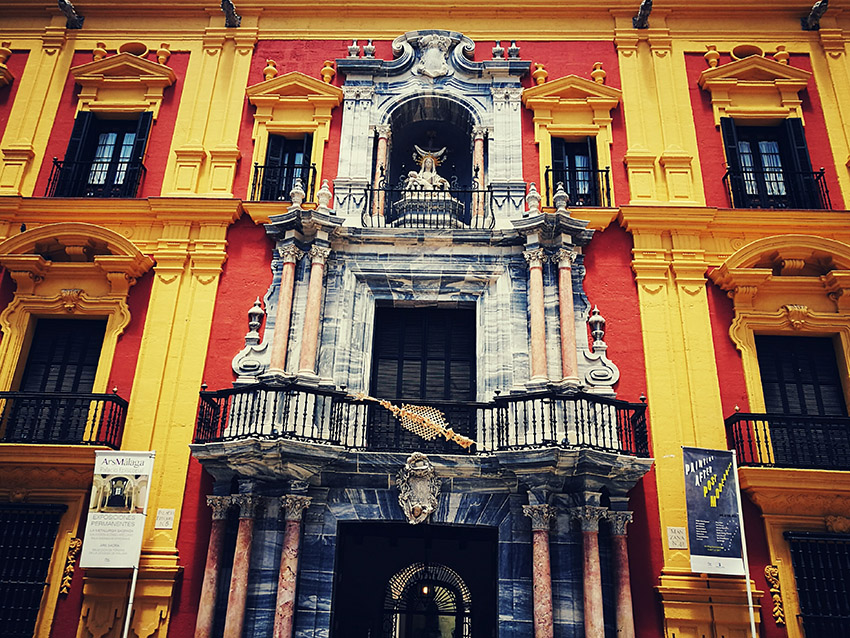 Even if you’re not into churches, the medieval Roman Catholic cathedral is hugely impressive. In fact, there are loads of awesome buildings in the surrounding area; the adjacent, rhubarb-and-custard coloured Episcopal Palace (pictured) is equally spectacular.

Even if it’s closed, or you don’t fancy going in, you’d be a fool not to stop for a drink in the cafe opposite, which overlooks a square dominated by a tranquil water fountain. Just around the corner, on the side of the cathedral, there’s a lush garden, through which flows an emerald-coloured stream. All very calming.

2. HAVE SUNDAY LUNCH LIKE A LOCAL… ON THE BEACH 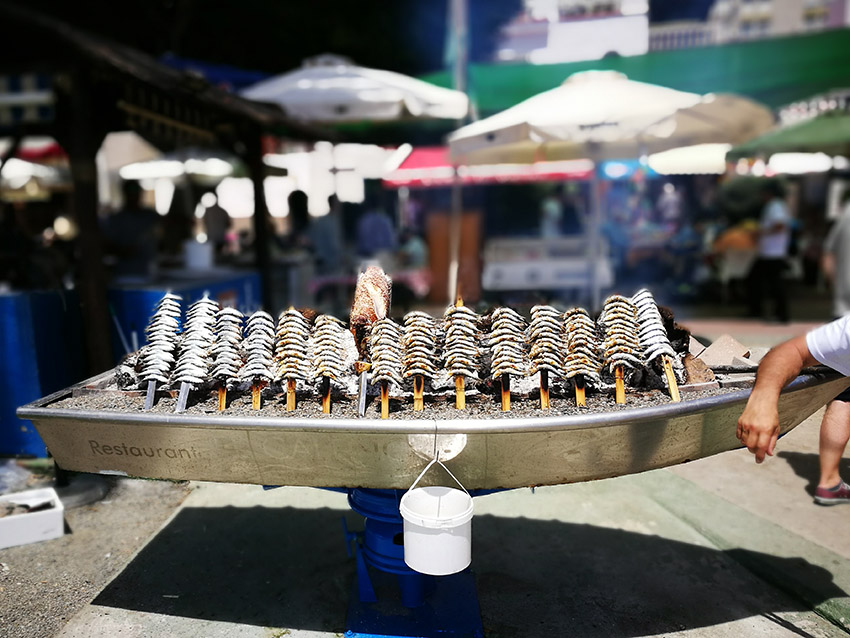 My friends and I arrived around noon for an al fresco lunch at one of the many beachfront restaurants, most of which were grilling large amounts of seafood on huge open barbecues in front of the tables (see pic). I’m ashamed to admit I was nursing a deeply unpleasant hangover.

We hadn’t booked, but everywhere was pretty empty, so we chilled on the beach for a while, then headed over to find a place for lunch. Despite the fact that they all looked empty, they all said they were fully booked. We started to get paranoid. Did we look like a bunch of English football hooligans?

We realised what the deal was at around 2pm, when seemingly the whole of Malaga rolled in, like a salivating tsunami. Lunching on the beach is clearly the done thing here for families on a Sunday, the lucky swines.

After mucho haggling, we secured a table, although we had to wait about three hours — just about long enough for my hangover to subside. It was worth the wait — just make sure you learn from our mistake.

1. CLIMB UP TO THE CASTLE OF GIBRALFARO/HAVE A DRINK AT THE PARADOR HOTEL 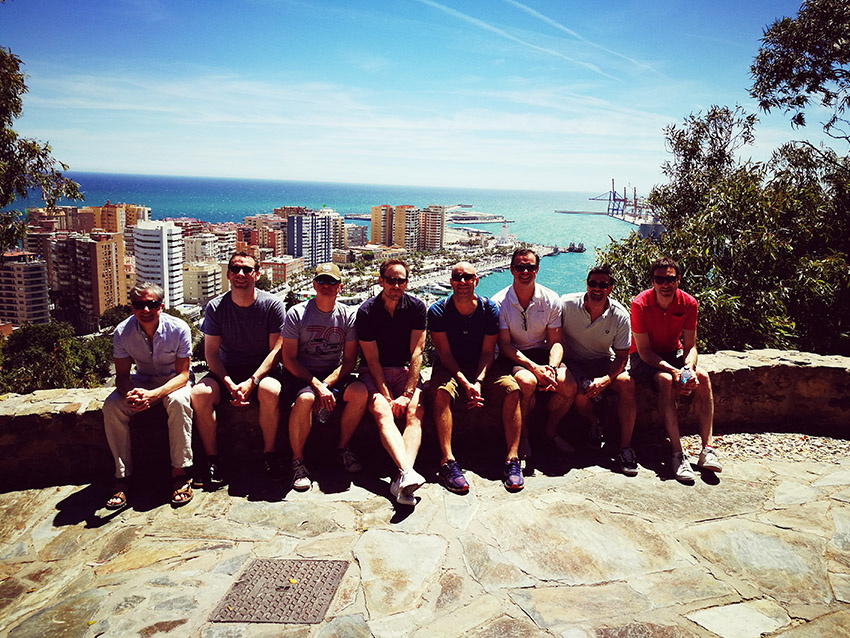 Pictured… the lads (me on the far right)

If you do one thing from this list, it has to be this. It’s a steep climb up to the 10th-century ruins of Castillo de Gibralfaro… but what a view you get on the way up. And there are plenty of places to stop and take in the Mediterranean panorama, including views of the bull ring and Pompidou Centre.

Just before you get to the castle, I’d highly recommend stopping for refreshments (you’ll need them by then) at the Parador Hotel around the corner. It’s kind of hidden from view from the summit, and a lot of people don’t seem to realise it’s there. It’s a beautiful place to sit, and the coffee’s much more palatable than the stuff served from the little van in front of the ruins (which is where all the other tourists went).

The ruins themselves offer even better views, far out across the countryside in all directions. They’re much bigger than they look from the outside, and I’ll never forget marching along the ramparts, before finishing with a cool beer in the on-site cafe.

I flew with Monarch Airlines from Gatwick (around £70). I stayed at an Air BnB, while my friends stayed at the centrally located Hotel Itaca. Below: the view from the Itaca’s rooftop pool at dusk. 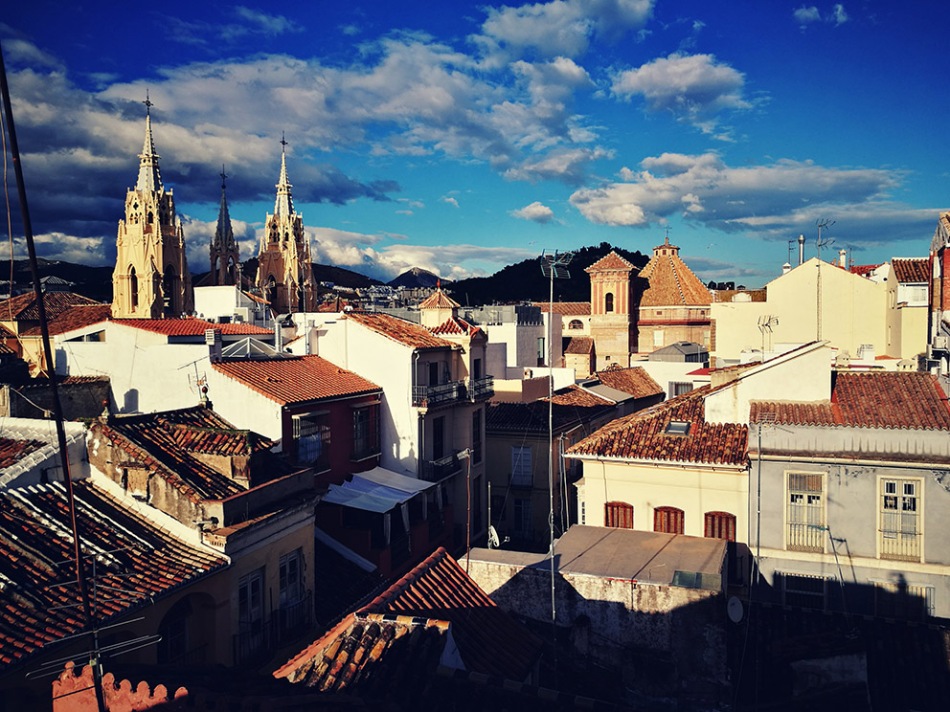 0 comments on “Best Things To Do In Malaga, Spain (my Six Personal Favourites)”