A dude in a ten-gallon hat is lurking by the doorway of the barbecue joint my friends and I have staggered into. I didn’t realise this at the time, but he’s Texas Joe, who once appeared on Dragons’ Den peddling his beef jerky. Dragons, it appeared, like beef. They fought over him like hyenas orbiting carrion, but Joe got burned when Peter Jones eventually pulled out of the deal.

It doesn’t look like it did Joe any harm though — his restaurant is packed.

I’m on a boozy Friday lads’ night out. There are six of us; we’ve all been friends for decades. We’d been in the Horseshoe Inn. At least, outside it — drinking lager around a barrel like hobos hugging an oil drum, and fraternising with journos from nearby News Corp UK. When somebody mentions there’s an American-style barbecue joint around the corner, the night’s dining option is suddenly a no-brainer.

So, Texas Joe’s it is. Despite its upmarket location, it soon becomes apparent this is no place for wine snobs. They have just two whites and two reds. This is fine with me; I’m not exactly expecting the Noble Rot wine list. What I do mind is that they come served in stubby glass beakers. Call me European, but wine should be served in a wine glass, with a stem for swirling and a bowl for nosing. The cocktails are decent, although my whiskey sour is a touch too sweet. 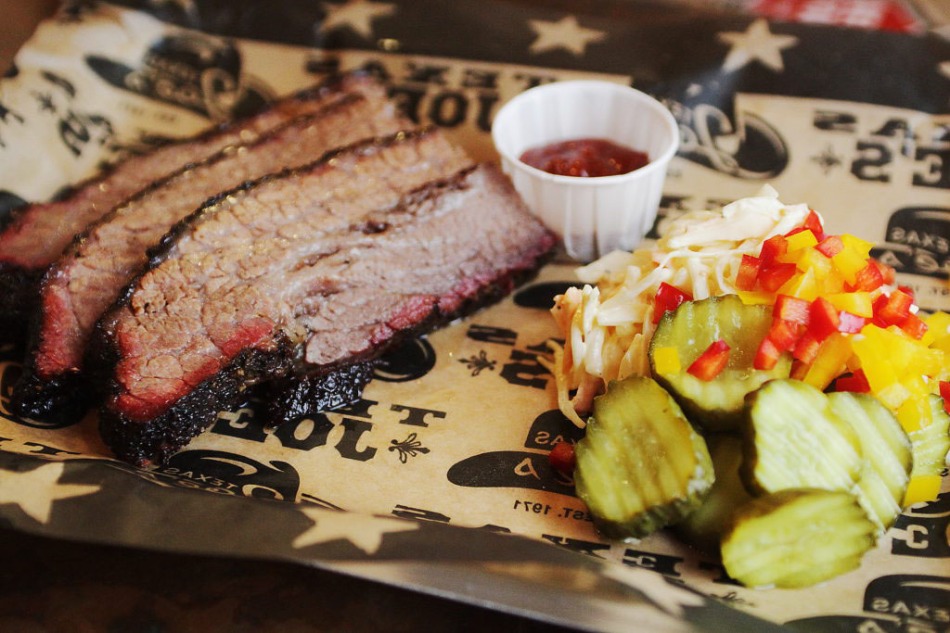 The menu is mocked up like a newspaper; a publication where all the news is cattle-related. The concept is simple — choose your animal. As I’m on the white, I go for chicken breast on the bone, with a side of jalapeños wrapped in bacon, yum. We also share some diminutive burritos. They’re super moreish. Nobody touches the Mother’s Pride-style, triangularly-sliced white bread that comes on the side though. Even half a dozen beer-soaked, middle aged men are too healthy for Mother’s Pride, it seems. 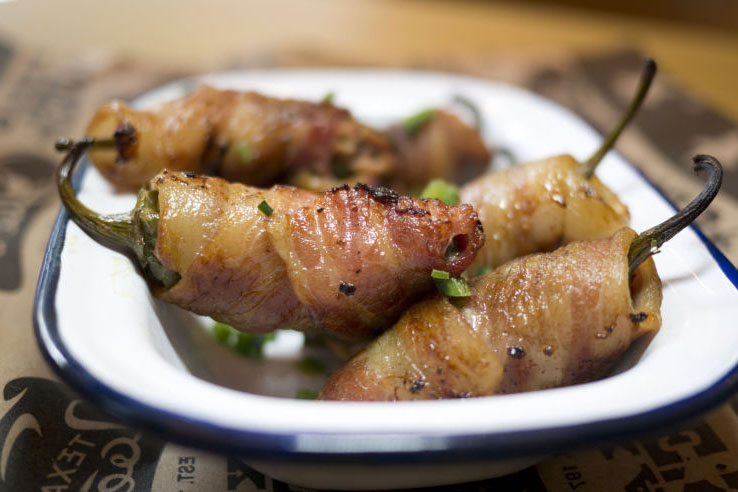 The waitresses are borderline surly, but in a nice way. We ask to move one of the tables. “No, I don’t think you’re allowed to do that”, we’re told. We do it anyway, and nobody says anything. And they’re very patient with our half-pissed uselessness when we try to order. To be fair, they must get far more obnoxious groups than us in here. Annoying we might be, but at least we’re polite.

An auburn buffalo’s head glares at me from the wall, soundracked by crackly old bluegrass. I’m no expert on vintage Americana, but it reminds me of Woody Guthrie. The place is good fun, generally. At least, perfect for a post-pub party: barbecued meat, salty fries, sugary cocktails and sticky sauces. The only downside is that you WILL wake up at 3am with a raging thirst.